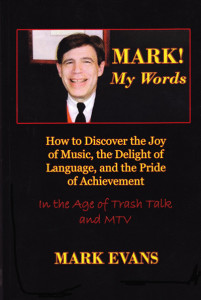 How to Discover the Joy of Music, the Delight of Language, and the Pride of Achievement In The Age of Trash Talk and MTV a new book by Dr. Mark Evans   Did you know that America is in the midst of a cultural crisis? In the age of MTV, classical music, jazz, film scores, and the masterpieces of musical theater are in danger of fading into an undeserved oblivion. Students are emerging from school unfamiliar with our nation’s musical heritage. This crisis extends not only to music, but also to an ignorance of good books, art, theater, and films. This crisis is exacerbated by our vanishing history, a decline in language, and a pervasive celebrity culture. Educational institutions, government, and the entertainment industry should be part of the solution, but they are part of the problem. If this problem is not solved, our nation’s cultural and artistic heritage will be irretrievably lost. “Mark! My Words” by Mark Evans is the first book to address the challenge of this crisis. In Mark! My Words, you will encounter:

You’ll meet the artist who gained prestige and wealth by exhibiting a shark pickled in formaldehyde, the composer whose most famous “musical work” consists of silence, and the musical revolutionary who rose to prominence by burning a violin on stage. You’ll find out why college professors and attorneys can’t write a simple English sentence and why college English majors have stopped studying Shakespeare. You’ll discover how our values and our culture are influenced and often manipulated by the media and how our dependence on technology has turned us into a nation of hares instead of tortoises. You’ll observe the impact of the Internet on our lives as our daily actions depend on two devices named after a rodent and a fruit. You’ll learn the answer to the two most popular questions regarding today’s music, “Where’s the melody?” and “Why can’t you understand the words?”

Perhaps of greatest importance, you’ll read a thorough explanation of why change and progress are not synonymous, as the author explains why “new and improved” often means a bigger box and fewer corn flakes. But Mark! My Words isn’t just about our cultural problems; it also offers solutions to those problems.  You’ll meet real heroes in Mark! My Words like the inner city teacher who changed the lives of her students by starting her own school and celebrate the achievements of composers, writers, and artists who have stood for integrity in an age of cultural confusion. The solution cannot be found in academia, government, or the entertainment industry. It can be found in our own energy, inspiration, and resolve. In the age of trash talk and MTV, the answer is Cultural Conservation. So Mark! My Words details what we can do as a society and what you can do as an individual to embark on an exciting journey of discovery that can truly impact your daily life. Together we can preserve the best of the past which shouldn’t  be forgotten, the best of the present which shouldn’t be ignored, and the best of the future which shouldn’t be undiscovered. You won’t read a book like this one every day. Mark! My Words is published by Basset Books and is available from Amazon.com, barnesandnoble.com, other online booksellers,  or can be ordered through your favorite book store.